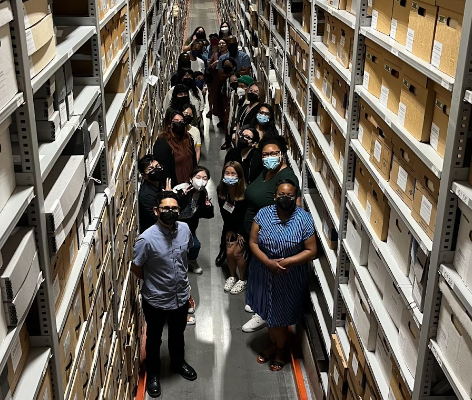 Speed-walking into the library at the end of lunch wasn’t the plan, but that was the start of my Minnesota Leadership Institute experience. I had dropped off my luggage at the Graduate Hotel, grabbed a change of clothes, sped-walked to the University of Minnesota Library, and switched my travel outfit to something more business casual. This was all accomplished in the forgiving heat of July. Ione, one of the program coordinators, insisted the change wasn’t necessary and welcomed me, but I had an outfit planned for that day. And my stubbornness insisted that this part should go right, despite yesterday’s mishaps.

The original plan entailed arriving in Minnesota the day before the institute’s first day, but my plane’s technical difficulties called for last minute alterations in the plans. So, by hook or crook, I arrived having missed the first half of the day. While my colleagues engaged in introductory exercises, I workshopped my mission statement through connecting flights and minor turbulence. The assignment was given to us participants well before the first day, but I found the exercise required a significant dose of self-reflection — an activity that’d constitute the institute’s main purpose.

The mission statements we shared bled into a discussion of values, those of our own and those of the institution for which we worked. We covered values for ALA, SAA, etc. During discussion, I got the impression that we considered the institutions’ dedication to their values cynically, like EDI was for show or not a real goal of an institution.

We did a poll about our top values and goals for an information institution. Community was number 1. I feel this ties into how our group sees and values culture, diversity, and sense of belonging, for we uphold community when we feel a sense of belonging to it, which derives from seeing and feeling our culture – with all its diversity – freely expressed within the community. Sense of belonging also resulted in being a top concern of the cohort regarding what an institution needs to foster and safeguard.

The next day, we covered communication and leadership styles. Distinguishing the styles helped in evaluating one’s own behavior, like deciding to respond rather than react in the heat of the moment. Leadership also incorporated anti-racist feminism and critical race theory, which weaved in valuing our experiences as people from marginalized communities as valid tools of success. Such validation counters pressures to forfeit these tools in place of ones socially constructed by the hegemony that hurts more than helps.

We were fortunate to have Amelious speak with us, a professional librarian, Black man, and member of the LGBTQ community who sared insight as to how to maintain one’s identity in a white dominated field. He let us know to keep the WHY & HOW of our purpose in mind, by sharing a TedTalk video of a man asking a member of his audience to sing Amazing Grace, then asking that same man to sing like his uncle just got out of jail. It was like he took us to church

Our cohort also enjoyed another speaker covering different types of microaggressions. We discussed different scenarios that highlighted various offenses. Doing so allowed us to assess the insidious ways microaggressions attack us whether unconsciously by the perpetrator through “Microinsults” or in a way that tries to gaslight survivors into believing they were not wronged, known as “Microinvalidations.”

Following talks on attacks identity were talks on the ways we view our differences and navigate our environment based on them. This included lessons on affirmative listening and paraphrasing the words of others to see how well we understood each other. For one activity, we broke into small groups to discuss the social Identifier worksheet we each completed for homework. This involved one member reading their profile, a different  person asking a question based on the profile, & another person paraphrasing the profile; I volunteered to do the latter. It was a challenge I reluctantly took on myself, but it was a good exercise in intersectionality, checking my own biases, and willingness to be uncomfortable. I basically wrote a summarized version of what my teammate said, had him read it, then asked him to tell me to change facts if I got them wrong. He said it was cool.

Other than deep philosophical discussions, hanging out and getting to know people was a cool part of the leadership institute too. I had lunch with a couple of my teammates from the activity previously mentioned. We chose to eat outside on a windy day. Protecting food from flying debris is exciting. One of the librarians is a  mom who worked long & hard to get an MA in science while the other, a science Librarian from Oregon, hates heat like me. She also thought the institute as a great experience to connect with POC without white people present.

For the entire experience, the University of Minnesota hosted us beyond the requirements of “Minnesota Nice.” They held a semi-fancy meet and greet for the participants and the university library’s faculty on the institute’s first night. The small tables and open bar gave us a chance to learn about our paths career and life-wise. For the last day, we toured the expansive archives, traveling below ground and craning our necks to peruse stories-high shelves. We also dabbled in arts and crafts to create vision boards reflecting our future aspirations in magazine cut-outs. Those of us who had time to kill before our flights took off decided to explore a bit of the Twin Cities. With the Light Rail passes generously gifted to us by our hosts, a group of us rode the Green Line to Minnehaha Falls. After the wonders of nature, we explored the Mall of America. Both places provided fun for the senses, yet the latter was made a little more memorable after riding the Log Chute – like Splash Mountain, complete with wet clothes at the end of the thrill.

Connecting with early-career librarians proved to be a true treasure of the institute. I met people from all over North America: a librarian from Canada, Louisiana, Hawaii, Oregon, Tennessee, the list goes on.  I even met a few librarians from different parts of North Carolina and one with whom I shared a name. She is Shelby, the resident librarian at the University of Delaware.

After departing – and more flight cancellation craziness – we continued the leadership institute virtually, meeting every couple weeks from August till the end of September. Discussions and jam board sessions focused on applying our mission statements to our real lives and expressing our concerns about obstacles towards meeting our goals. Understanding to embrace the vulnerability of open communication served as a running theme in my reflections. The zoom sessions also continued hearing from the UMN staff about their paths to librarianship. The Institutional Archivist, Ellen Holt-Werle, spoke about starting a job from scratch which made me less scared and more confident about uncertainty on the job by normalizing imperfections while learning on the go.

The session on critical hope, a concept discussed by the author Dr. Kari Grain, offered an outlook of positivity based on acknowledging trauma and the recognition of practicing positivity despite its tricky execution. This same session touched on different kinds of transformative struggles as well. Ultimately, the lesson bolstered my beliefs of embracing the hard times for their opportunities of transformation and growth. The last session’s breakout rooms allowed me to talk with cataloging librarians about interdepartmental collaboration, like experience with IL instruction and how working with subject headings play a role shaping information literacy.

Being able to talk through these topics along with the other discussions, virtual and in-person,  helps to ground librarianship as a path in which I can walk in the present, rather than just an idea I had while in library school. As such, the MN Leadership Institute embodied the mission of my residency while readying me for the moments onward.

(you can’t see me in the picture below because I’m in the way back and I’m kind of short.)